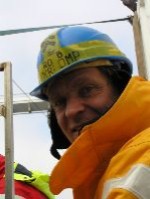 Rob Witbaard is a marine ecologist, currently working in the Marine Ecology department of the Royal Netherlands Institute for Sea Research (NIOZ) at Texel.

Rob is one of the pioneers in the field of molluscan sclerochronology, and in 1997 he published the first 100-yr+ chronology using shells of Arctica islandica from the Fladen Ground in the northern North Sea.

Rob’s role in ARAMACC is as supervisor of the WP3 project “The ecological and biological drivers of calcification arate and increment formation in A. islandica” (with ARAMACC researcher Irene Ballesta Artero)