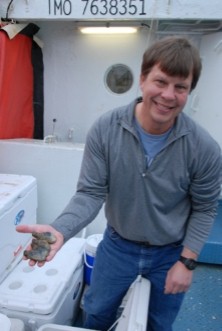 I am a marine ecologist at Akvaplan-niva, where I hold the position of Senior Scientist and coordinate studies of the impact of climate change on Arctic benthic communities, food webs, and marine ecosystems. I was trained as a benthic ecologist in in Florida, South Carolina and Alaska, where I first became interested in Arctic marine science. I held a post-doc at the International Atomic Energy Agency in Marine Environmental Lab in Monaco, where I examined particulate flux in the Mediterranean.  My current main research interests are detecting evidence of climate change from growth patterns in bivalve molluscs (sclerochronology) and studying the structure of benthic communities in relation to oceanographic variability.